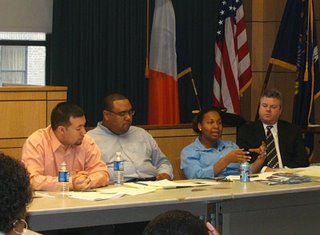 "I think the penalties [for low-level crime] need to be much higher, because otherwise people will keep committing crimes,” said one student from the Bronx School for Law, Government and Justice.

“But what would they learn in jail?” her classmate replied. “You can’t keep people there forever. What they need is drug treatment or a job, stuff that can keep them from getting arrested again.”

A healthy debate about the court system’s response to low-level crime was breaking out at Bronx Community Solution’s first community advisory board meeting.

I liked the above exchange, because it shows the complexity of views that many community residents hold about the court system. The truth is that they want the court to do both - to enforce accountability for individuals who break the law, while at the same time offering them a helping hand. It’s a much more complex view than the “soft on crime, hard on crime” clichés that often dominate the debate about the criminal justice system.

For Ruben Austria, a South Bronx resident who works for Urban Youth Alliance (a faith-based employment and training organization that's done great work with our participants), the right way to strike a balance between punishment and help is to "create a sense that individuals are accountable to both the community and the court system" when they receive a Bronx Community Solutions sentence.

That might mean having participants perform community service work in neighborhoods hit hardest by quality-of-life crime, or sit down with local residents to have a respectful dialogue about the impact of so-called "victimless crime" (an idea pioneered at the Midtown Community Court). It would also mean creating job and mentorship opportunities for our clients with local employers, churches and other civic associations.

Monday's community advisory board meeting was the first of an ongoing series, attended by 25 local residents, church leaders, representatives of Bronx-based social service agencies, high school students, a prosecutor, defense attorney and a representative of the Bronx Borough President's Office.

It took place in the mock courtroom of the Bronx School for Law, Government and Justice, an impressive school (created by the non-profit group The Urban Assembly) located around the corner from the Bronx courthouse. 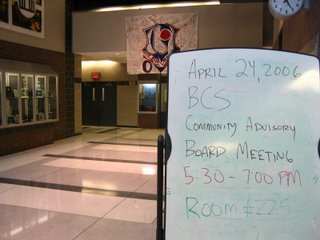 Unlike police departments or prosecutors’ offices, which have staff dedicated to the job of community relations, courts have traditionally held themselves at a reserve from the public. This is in part due to judicial principles of impartiality and fairness - the job of the courts is to enforce and interpret the law, not respond to public opinion. But there’s a price to pay for this separation in terms of public faith and confidence in the justice system, as shown by surveys of public opinion that consistently rate state courts as distant and out of touch with the public.

To be sure, community engagement in the Bronx, with its 1.5 million residents and dozens of distinct communities, presents a major challenge. We'll never achieve the familiarity and small-town feeling of a place like the Red Hook Community Justice Center, where the judge greets residents by name at the local deli, prosecutors and defense attorneys coach youth baseball teams at a nearby park and court officers tutor kids after they get out of school.

Understanding that reality, one strategy is to focus on a single park, street corner or neighborhood at a time that needs help, and over time work in every area of the Bronx. Meisha Ross-Porter, the Principal of the Bronx School for Law, Government and Justice, called this the "safe space" approach. "The goal is to create positive rituals and routines that keep spaces clean and kept up" said Meisha. I liked Meisha's idea, and at our next community advisory board meeting we'll discuss how to put it into practice.

Anonymous said…
This entry raises an interesting dilemma that runs to the heart of public adminstration- how do we engage with communities and genuinely involve them in decision making? What is the community and how do we avoid the trap of the views of the most vocal members being the only views represented? It also poses the additional dilemma of what happens when those views are contradictory. Yet those questions are not barriers to meaningful dialogue and progress, they are concerns for all to bear in mind. The important point is for public bodies, and courts in particular as the most reserved of public bodies, to embrace the need to establish dialogue and to make it meaningful by acting on that dialogue and allow decision making to be genuinely particpative.
3:20 PM

Anonymous said…
This was an exciting meeting as we were able to engage in real dialogue about balancing the need to rehabilitate and serve with the importance of accountability to the local community. Urban Youth Alliance is a community-based organization that has trained youth for leadership since 1970 and now provides training and job placement for youth referred by Bronx Community Solutions. Located in the Hub and staffed primarily by Bronx residents, we are well aware of the challenges and opportunities in our community. Working with Bronx Community Solutions has been really beneficial to us in several ways. The initiative helps us connect misdemeanor offenders with employment, who might not otherwise seek us out on their own. Also, working with the Center for Court Innovation has made the courts far more accessible to us as we seek to advocate for and serve the residents of our neighborhood.
12:48 AM

Anonymous said…
An additional point raised by several individuals during the Community Advisory Board meeting was the desire for offenders to understand that their crimes have real consequences in the community. This desire is an entry point for increased involvement, such as participation on community impact panels, which can further establish links between neighborhoods and the courts.
4:18 PM

Anonymous said…
I commend the idea of using this vehicle to help others, like us here at
University of Maryland School of Law, see exactly what the up-close of
the changes we are seeking actually look like. Great idea and I look
forward to reading more.
Barbara Grochal