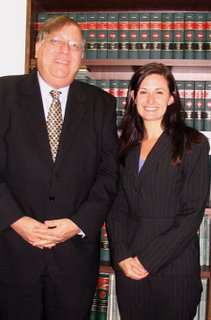 When Judge Margulis heard about Bronx Community Solutions, he wondered if it would work in a courtroom that hears almost 100 cases a day. “I thought it would slow things down,” he said.

My job, when I started last June as Judge Margulis's first resource coordinator: to convince him that Bronx Community Solutions had something to offer a busy arraignment courtroom.

Almost a year later, the court continues its same daily operations, but with a problem-solving feel. In small but important ways, Judge Margulis says he has changed how he operates. For example, he notes that he is careful to instruct defendants to report immediately to the Bronx Community Solutions intake office, even asking court officers to escort them when a BCS staff member isn’t available. “What I’ve learned is that having defendants report immediately is a major part in having them complete,” he said.

Before court comes up in the morning, I review the daily docket and identify cases that I feel are appropriate for a community-based sanction. Judge Margulis tells me that he has come to rely on these recommendations, and has even begun to offer sentencing alternatives like inpatient drug treatment on his own. “Now I have options that didn’t exist before,” he said. "My choices aren't just 10 days jail or a straight conditional discharge," a sentence which allows offenders to walk out of court without any additional obligations imposed on them.

In a courtroom where over half of misdemeanor offenders plead guilty to their charge, this flexibility gives Judge Margulis some important tools for addressing problems (like drug addiction, homelessness and unemployment) that may have led to an arrest. The goal is to halt the revolving door that brings people back into court again and again. “In a courtroom like this, I feel I am successful if I only see a defendant once" Judge Margulis told me. "Since BCS has started, I don’t see as many people coming back.”

When did Judge Margulis become a supporter of Bronx Community Solutions? An important moment came a few months after I started when Judge Margulis received a letter from a female defendant whom he had sentenced to drug treatment through Bronx Community Solutions. She expressed profound gratitude for getting a chance to turn her life around. “It was very heartwarming to read,” said Judge Margulis, who typically only hears about defendants again if they are re-arrested.

Receiving the letter showed that Bronx Community Solutions could achieve results, and fueled an interest in the services we provide, according to Judge Margulis. Part of my job is to keep him informed of new sentencing alternatives we’ve created, such as a job training program for young people aged 19-21 run by FEGS Health and Human Services. “Thirty years ago, I didn’t think I could get used to legal acronyms like ‘ACD’s’ and ‘DISCONS’,” he said. “Now I tell my wife that I have acronyms like 'FEGS' to learn all over again.”

We've also shown Judge Margulis that we can operate without interrupting the efficient processing of cases. By reviewing the calendar of cases to be heard in the morning and collaborating with prosecutors and defense counsel before the case is called, I don’t slow down the process by conferencing or 2nd calling cases as everything is worked out in advance.

We've learned a lot working with Judge Margulis and the clerks and court officers who are responsible for the efficient operations of the courtroom. Most importantly, we've learned how important it is to listen, to ask for help and to involve people in what we do. For example, before I started, we had several preliminary meetings with Judge Margulis, his clerks and court officers, to get their input and answer any questions they might have.

My daily presence in court has also helped - over time, I've gotten to know the people who work here. (Sharing my family's ”death by chocolate” recipe hasn't hurt, either.) As a result, they've become critical partners in making the project work. For example, the "show-up" rate, or the percentage of people who make it from the coutroom to the Bronx Community Solutions intake office after they're been sentenced to our project, is 97 percent. That's a much higher rate than the 85 percent rate reported at other large urban couthouses, and it's a rate that the court officers (who walk people to our offices when I'm not available) in the courtroom are justifiably proud of.

Last week, Judge Margulis learned that he would be moving to Queens, the county where he was elected, which means we'll be working with a new judge in the arraignment courtroom. Judge Margulis says he's looking forward to linking defendants to social services and community service (such as the Queens Plaza Community Cleanup) in his new courtroom.

My new challenge, in addition to working with Judge Margulis’s successor, is figuring out how to make Bronx Community Solutions available to the over other 40 judges in the Bronx with a small staff of resource coordinators. It is crucial that we expand without sacrificing the personal attention that’s been so important in Judge Margulis' courtroom. As I've seen, getting acquainted can transform a questioning judge into an important supporter.
Email Post
Labels: About Bronx Community Solutions Working with Court Players

Anonymous said…
Hi there I am a police officer from Nottinghamshire in england and visited New York recently to research problem solving justice. We visited a number of courts including redhook and hatlem in addition to center of court innovation where we heard about the development of your project.

It is great to see it developing and i will monitor it with interest. we are just writing the report for our own area and will look to your example in helping people in nottingham.

Judge Jorge Simon said…
As one of the "senior"(as Julius Lang seems to enjoy referring to me as) community court judges, I wanted to let you know that I thoroughly enjoyed your " A Judge's Perspective" blog. I have been assigned to the Hartford
Community for over three years and can identify with many of Judge's Margulis' intial concerns. Here in Hartford we handle over 8000 new case per year and have worked closely with the prosecutor's office and treatment agencies to provide what we believe to be an effective treatment network for many of the defendants appearing in court. Although we are gratified when someone gets the help they need, we realize that we must work harder to find alternatives to incarceration for many of the repeat offenders fighting addiction and mental health issues. I think it is important to realize that from where we sit, judges prefer options. Community Courts give us those options. Nice job, keep up the good work.
1:27 PM

Anonymous said…
I have been the judicial officer for the Indianapolis Community Court since it was created in 2001. Before that time, I was assigned to the downtown misdemeanor courts for 6 years. I still in awe of the way that Community Court has changed the way I think about cases and how significant a role the judge can play to connect a defendant to much needed social services.(also known as "a nudge from the judge"!) I realized that community court has changed the way I think about cases and has formed who I am as a judicial officer. This change was highlighted for me when I recently started covering a D felony calendar for a downtown court judge a few times a month. So many of the cases I hear downtown are the very same individuals committing the same offenses I see in Community Court but who have a past history that has landed them in a D felony court. Having a resource coordinator triage dockets to id cases for a community-based sanction would be a great way to bring these problem solving principles into the mainstream court. Without a resource coordinator however, it would be difficult if not virtually impossible to monitor compliance. I would love to see those cases and their recidivism rates compared to the cases not selected and see how they stack up. My guess is that the court administrator would be wowed with the results. This is a great idea I intend to pursue! I wish you continued success. I will continue to follow the comments on the judge’s perspective on this blog. Sincerely, Annie Christ-Garcia, Commissioner Indianapolis Community Court
4:29 PM

Anonymous said…
Congratulations on your Community Court. I have been a Therapeutic Justice Judge since 1994 and I applaud your efforts to improve the way court business is conducted. I believe that my collaborative court work is the most important contribution I have made on this planet other than raising my children. Best wishes.
8:36 PM