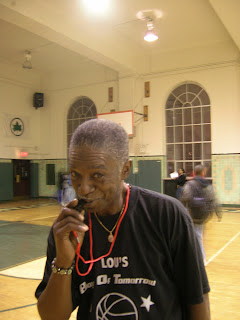 "I was a hard head spoiled kid, like the kids you guys work with and they remind me of myself when I was growing up". This was O.T.s’ response when asked why he enjoyed being the Bronx Bomber’s referee.

However, he was not only an adolescent dealing with familiar difficulties inner city youth deal with he was also a star basketball player. As a student in Roosevelt High School he was a luminary player and at one point "averaged 28 points and ten assists." He then went to Benedict College, at Columbia South Carolina on a full basketball scholarship and he graduated with a bachelor’s degree in health and physical education.

O.T.’s dreams of playing professional basketball never panned out but despite this setback he stayed involved with basketball and utilized his talent and skills to give back to the youth in his community. He has established a community basketball league that plays other Bronx teams. In the process of organizing a tournament, he came across Bronx Community Solutions Bronx Bombers basketball team and volunteered to be a referee.

The rest is history. His volunteer work as a referee has become vital to the stability of the Bronx Bombers. He is a mentor that provides support and guidance for the team participants and his wealth of knowledge of community resources is invaluable. He provides Bronx Community Solutions case managers with information about upcoming community youth events. He also informs our office about employment resources for adolescents. He even refers youth to our office for assistance (i.e. job training, GED training …). Additionally, he encourages youth to be in school and makes the best of their athletic skills by assisting college bound adolescents to receive scholarships. "It is hard to make it out here without an education so these kids need all the support they can get."

People usually believe that the only way to influence change is to be part of an established community organization but anyone can make positive changes in their community. O.T. is an example of how individuals from the community can influence change and motivate youth to engage and remain in positive activities.

He has a genuine interest in the development and progress of his community and the individuals in it. He is driven to work with youth because "many are lost and have minimal guidance" and basketball is his vehicle to motivate them to make positive changes and to recognize that they have potential to succeed.

Simply stated by O.T., "Life is like basketball because to be in it you have to do some teamwork."