Skip to main content
Labels
Posted by Kate Krontiris May 01, 2007

Seeing the Court from the Inside 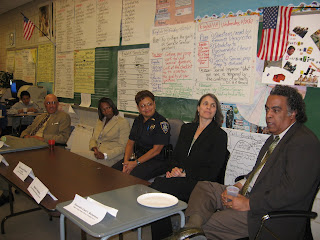 “Have you ever made a judgment and then felt bad about it the next day? Like it was the wrong decision?” asked Henry, a seventh-grade student at the Bronx School for Law, Government, and Justice.

Judge Richardson continued: “You always try, as a judge, to mull over your decisions when you make them. But there are some difficult situations – and you might change your mind about something that seemed like the right decision at the time.”

This exchange happened Monday as part of Law Day, an annual event held nationwide designed to educate the public about the court system.

Our event in the Bronx was entitled “10 Things You Might Not Have Known About the Law,” and we hosted 50 7th graders from the nearby high school for a daylong session that included a court tour, a Jeopardy-style quiz competition, and a lunchtime panel with Judge Richardson, Judge Eugene Oliver (the Deputy Administrative Judge of the Criminal Division Bronx Supreme Court), Nestor Ferriero (chief of the Narcotics Bureau of the Bronx District Attorney’s Office), Robin Steinberg (Executive Director of Bronx Defenders, a public defense organization) and Court Officer Rachel Villarini.

The students' first step was to visit an arraignment court part at the Bronx Criminal Court, where the students observed a number of court cases.

It was an exciting opportunity for the students, who are used to the Law and Order courtrooms they see on television. “We saw an abuse case, and we saw a stolen identity case, and we saw a trespassing case! It was cool!” recounted Elizabeth, her eyes ablaze.

Elizabeth’s enthusiastic comment not only reflected her affinity for the law, but her desire to see real courts in action. Her visit was made richer by a conversation with the supervising court officer in the part, by a running commentary from Bronx Community Solutions resource coordinators, and by a special discussion with the judge on the bench. 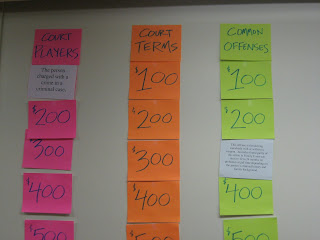 After their court observation, the students participated in Court Jeopardy, an activity designed by Bronx Community Solutions staff to test their knowledge about court players, court terms, and common offenses in a fun way. Asked to work in teams to get the right answer, the students made it clear how much they already knew about the court system, answering questions about the roles played by prosecutors, defense attorneys and court officers in the courtroom.

Back at the school for a pizza lunch and panel discussion, the students had a more intimate opportunity to ask the questions they had built up during their tour. For an hour, they asked questions about the number of cases judges hear in a day, about the craziest thing that has ever happened in the courtroom, and about what it is like to be in jail. There were also some very sophisticated questions, getting at themes such as defending somebody who you believe to be guilty.

“Well, I think of it this way,” answered Robin Steinberg, Executive Director of the Bronx Defenders. “Imagine the worst thing that you have ever done. Now imagine that you walk into a classroom and the teacher introduces you to the entire class just by telling that one thing that you did. Do you think that would be fair?”

“Well that is what it is like for somebody who is charged with a crime, guilty or not, to go before a judge. What makes me get out of bed in the morning is to think of my clients as whole people – and to be able to portray them as good sisters, good brothers, good parents, or good children. That means that I have to get to know my clients well and be able to speak about them in all of their complexity as humans. And that is how I defend somebody who I think is guilty.”

When asked, at the end of the panel, whether there were any misconceptions about the law that panelists wanted to clarify with the students, each person had something to say.

“It’s better to be smart than cool. Choose your friends carefully, because the law will hold you responsible for things you may not be aware of. If you are in the same car as somebody with a gun in the glove compartment, even if you do not know about it, you are getting arrested,” said Nestor Ferreiro.

Court Officer Rachel Villarini’s comment was a little bit different: “Just like any group of human beings, there are good law enforcement officers out there and there are bad ones. If you have a bad experience with an officer, don’t think that we are all like that. We are compassionate and we care about people too.”

Judge Eugene Oliver gave some advice that he has given to his own son. “If the police stop you for any reason, cooperate with them. Even if you feel angry about being stopped, it is in your best interest to comply with their requests. We see people arrested all the time for resisting arrest or disorderly conduct. You will save yourself a lot of trouble and a horrible night in jail if you reply to the police respectfully.”

The students’ attentive silence indicated that they were listening hard to these words of advice. And the hands that shot up in the air as soon as he was finished speaking indicated that there is a lot more talking to do. While many adults bemoan the behaviors and attitudes that they see from young people today, we were reminded yesterday of the incredible thoughtfulness, desire to learn, and optimism in many youth.

As our panelists agreed after the discussion, our future is bright if these students become the leaders of tomorrow.
Email Post
Labels: Community Engagement Working with Court Players Youth