The Passage of Health Care Reform: A Bronx Congressman's Reaction 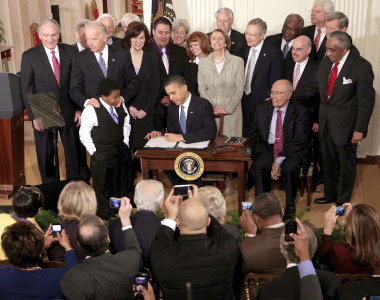 Congressman Eliot Engel, a senior member of the House Energy and Commerce Committee’s Subcommittee on Health, who represents the Bronx as well as Rockland and Westchester, had a key role in ensuring this weeks historic passage of Comprehensive Health Care Reform.

After casting his YES vote, Mr. Engel stated that “Despite months of rhetoric and mistruths uttered by the opposition, and the fear and uncertainty that those words caused, the American people will receive reform which will improve lives, and more importantly, save lives. For the vast majority of Americans, no changes to their health care coverage will occur at all. Meanwhile, millions of more Americans will be able to receive basic care."

Mr. Engel, who was invited to the White House for yesterday's official signing of the bill, concluded by stating that he has "always been proud to serve as a Member of Congress...tonight, as I cast the 216th and deciding vote on the reconciliation package, is the proudest I have ever been over that span of time.”