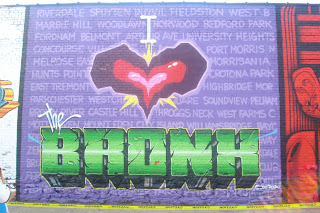 By T.K. Singleton Community Initiatives Coordinator
"Mommy look! we hit the jackpot!" - a local Hunts Point boy yelled (viewing an inflatable bowncy house) as he walked down Whitlock Avenue and 165th Street.
The Bronx is the birthplace of international culture, but you wouldn't know it by walking through this corridor of Longwood/Hunts Point. These murals are as important to the business owners in the area as they are to the residents of the community. A community, by definition generates its own content, its own style and culture. It’s all by the people, for the people and that‘s the motivation for the project.
For me, "We hit the Jackpot" is the summary of last Saturday's event! The community came out and celebrated the viewing of the recently installed murals by DYM, GFR and the "Legendary Mural Kings" TAT's Crew. Each Block had a feeling of pride and culture. I spoke to a parent said that " Whitlock used to so dark and scary, I would get off at Hunt pt. train station and walk... Now Im getting off at Whitlock" Project A.C.T. (Artist Coming Together) not only changes the overall look of the community, it change the perception of the residents, business owners and even MTA workers(who have been working tirelessly to complete the new Whitlock avenue train station). The Bronx Borough President Ruben Diaz, Jr was talking to his father( State Senator Reverend Ruben Diaz, Sr) about the project he told his father "this is the Type of Graffiti we promote"- explaining the difference between Murals and Bombing. As the day progressed, We had yet another visitor Assemblyman Marcos Crespo who was in awe of the different type of Murals.
The day was filled with music, food and art- everyone who attended (both young and old, Artists and Business owners, BCS and Police) left will a feeling of accomplishment and contentment that an idea was put into A.C.T.ion
Email Post