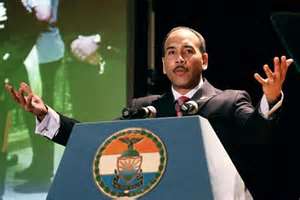 On February 19, 2013, Borough President Ruben Diaz Jr. addressed o a full auditorium of supporters at the Monroe High School Campus about the state of the Bronx. During his speech, Borough President Diaz Jr. emphasized his achievements made over the past year and during his first term. “The New Bronx,” as Ruben Diaz Jr. calls the borough, “has made tremendous progress towards a better tomorrow with lower crime rates, cleaner neighborhoods, higher investments, a growing economy and thousands of jobs...We are growing by leaps and bounds. We are seeing significant progress in our efforts to make the Bronx an even greater place to live, work and raise a family,” stated Borough President Diaz Jr.
Being a Bronx resident, I am happy about the concept of “The New Bronx” and look forward to the future of the borough. I look forward to a time when the plans of the Borough President have been fully implemented.
Borough President Diaz Jr. called for the creation of a new gun crime registry, which would have reporting requirements similar to that of sex offenders. According to the Borough President, the registry would be available online and require perpetrators of gun violence to keep updated records with the police regarding their living and employment arrangements. Law abiding citizens ought to know who among us is responsible for gun violence, and this initiative will accomplish that.
I am a member of the Bronx community, and my main concern is my child’s safety at school. As a parent of a 4th grader, a new gun crime registry will keep me, as well as other parents, aware of individuals who have a history of gun violence.
He said that this year Bronxites can look forward to an even bigger Bronx Week and a prolonged Salsa Fest. He also announced that next year, 2014, will be celebrated as the Bronx County centennial anniversary. The Solar Thermal Initiative was launched this year to support residential buildings and help install solar thermal hot water systems to promote a greener and healthier borough.
“In 2013, we will work with our partners at all levels of government to create a fund that will leverage our capital dollars with existing programs at the federal and state level, so more residences can take part in what we are doing. We have to be smarter with how we spend vital tax dollars so we can create more sustainable housing, so that everyone can recoup the remarkable savings that come over time,” he stated, speaking of his plan to create a Green Development Fund.
In addition to greening the mass transit system in the Bronx, Borough President will continue to work with MTA in expanding Metro-North services to the Bronx. “The dream of Metro-North service in the east Bronx must be become a reality now,” he proclaimed.
Ruben Diaz Jr. stands for restored education. He believes that better technology-fueled education opportunities will allow Bronx children a better future and high paying STEM careers. Increased educational opportunities will be of great help. Our children need to know that there is a bigger world outside of their urban community, with different cultures, different people and different resources.


Although I agree with Diaz Jr's stated position on education, I also feel that we as a community need to directly address the trouble with our youth. Many of our children do not have a positive place to release their negative energies, a place to be heard and voice their opinions, a place to relax, an organization to keep them off the streets. How can we, as a society, build a better future without including the very individuals who will be running things later down the line?


A well-known proverb is, “it takes a village to raise one child,” so imagine what we could accomplish with our youth if we, as a community, work together. I believe that raising our children effectively requires having unbiased minds and engaging them with intensive listening.