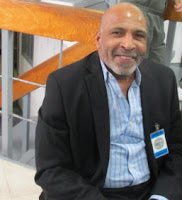 Last month, BCS staff member Ramon Semorile participated in an information session for inmates at Metropolitan Correctional Center about the Reentry Anonymous Support Group. The group helps ex-offenders break the cycle of recidivism and offers support as they make the difficult transition back into their communities. Below, Mr. Semorile describes his experience speaking about the group.

On May 23rd I went to Metropolitan Correctional Center as a representative of the Reentry Anonymous Support Group to talk to inmates that were nearing their release dates. We were part of a group of about 10 different agencies including U.S. public defenders, U.S. Parole and the DOE fund. The purpose of the visit was to let inmates know about support resources available to them once they are released.

We went up to one of the dormitories and I set up a table for the group. I sat down, and some gentlemen approached, curious to learn more about Reentry Anonymous. I told them about the work of the group and let them know how to learn more from the Reentry Anonymous website. They were happy to see that there were people there to support them. The other providers and correctional officers were also interested to hear about our work. It was a good day for all.