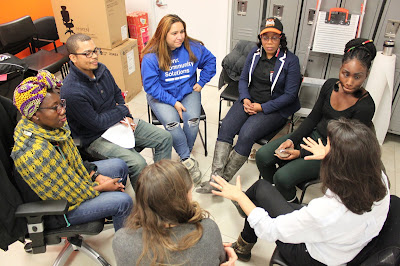 Unexpected connections:
Our two participants, Dario, a 19-year-old Latino man from the Bronx who was arrested for graffiti, and Lucas, a 28-year-old white man from Queens arrested for marijuana possession, initially appeared to have nothing in common. Despite their significant differences, the circle process helped the two men identify common points of connection, including the fact that Lucas was currently employed as electrical engineer, while Dario was hoping to join a union to become an engineer after having graduated high school. When discussing their reactions to their arrests, the two men described their drastically different experiences with law enforcement, and their shared desires to avoid future justice involvement. During the circle, both participants opened up about personal challenges they have experienced in their families and relationships, and the community member, Khalil, shared about the role that toxic masculinity has played in preventing himself and other men in his community from seeking needed mental health and supportive services. At the end of the circle, both participants expressed gratitude for the ability to participate in the circle process, for having the opportunity to both share personal and vulnerable stories, and for the chance to develop connections with someone from a different walk of life.

Discovering common ground and generating support:
Justin is a 29-year-old Latino man arrested for marijuana possession. Justin participated as a solo participant in our circle, along with our community member, James, a 28-year-old man who had past encounters with law enforcement as a young person, who is now invested in impacting his community through storytelling and mentorship. During the circle, Justin and James discovered that they had both recently moved back to New York from the South and moved in with a family member after a difficult breakup. Both men also shared that they were recovering from heartbreak and struggling to rebuild their lives, dignity, and careers in the aftermath of their relationships ending. Other significant similarities between the members were revealed over the course of the circle, including that all of the men in the room had grown up with absent fathers and single mothers who had struggled to provide the kind of emotional support their sons needed. The men in the circle shared about the feelings of shame and embarrassment they experienced after their arrest, and their concern about how they would be perceived by their families. In addition, the circle also discovered that James was currently working as a truck driver, while Justin had recently obtained his trucking license and was actively looking for trucking opportunities. After the circle ended, James exchanged numbers with Justin and offered to help him find employment in the trucking industry. The participant Justin also expressed a strong interest in returning to the program after his case was dismissed to volunteer as a community member.

Developing a sense of healthy masculinity:
Kevin is an 18-year-old young man who was charged with possession of marijuana. Included in this circle were two community members Evan, and Khalil. Evan is a formerly incarcerated man who is now pursuing opportunities to mentor young people and give back to his community, and Khalil is a minister and supervisor at a neighborhood organization who has had prior justice involvement, and who now works to prevent violence by mentoring young people in his neighborhood. Prior to the circle starting, Kevin was closed off and slightly confrontational. The circle engaged in a conversation about what it means to be a man in our communities, and discussed experiences of vulnerability and loss. The conversation explored experiences of grieving after the loss of a loved one, and the difficulty in navigating emotions as a man. During the circle, Kevin also discussed his experience of his arrest, and opened up about what he would do differently in the future to make better decisions. Evan offered advice on what it means to be a man in prison, and why Kevin should avoid going there at all costs. Towards the end of the circle, Kevin thanked Khalil for teaching him about what it means to be a man, and Khalil shared that he had learned a lot about manhood from speaking to Kevin as well. Khalil then offered to help Kevin with mentoring and job opportunities moving forward. We ended the circle with a powerful statement from Kevin: “I don’t have a lot of male role models in my neighborhood. It’s hard to find people to look up, but I feel like I’ve found that group today amongst you guys.” Since the circle has ended, Kevin has voluntarily returned to BCJ to meet with a social worker. During his voluntary case management session, Kevin discussed his plans to go to college, explored potential job opportunities in the construction field, and began working on his resume. Following his individual session, the social worker from BCJ is now working to connect Kevin to a basketball coach at Bronx River Community Center so he can get involved in basketball in a safe neighborhood space. Finally, Kevin has expressed an interest in returning to Bronx Community Justice circles as a volunteer community member this fall.
Email Post
Labels: Alternatives to Incarceration Bronx Community Solutions Community Engagement NYPD Restorative Justice